Menu
back to all

About two years ago, I was looking through my list of plot ideas and notes for something interesting to write. I had just finished ‘Corrective Therapy’ and was looking to create something along more conventional lines. My editor, Charlie, and I had discussed an excellent idea that loomed large on my list.

Here, I should call out for the other two people who are also partly responsible for this vast tale. Firstly, there is Charlie. My faithful sub-editor (!) who started as a grammar checker and is now an intimate part of my writing process. Ideas and urges, he plants them in my head! The editing process has moved to become a revision process that is a joy for me to behold due to his unstinting efforts. Secondly, remotely and to some extent unconsciously, Sardax (the esteemed FD artist) has not only provided the covers for this series of books, his graphic work has been a great inspiration for one who deals in words and not pictures! Each of the domains was pictured in my head in the charcoal and white that he uses and the scenes that I write are in the same vein as his work. So, thanks for the assistance boys… it is appreciated! There is some use for men after all!

The plot idea that so took me was to write a novel that was sort of ‘Westworld’ in nature. Charlie and I discussed it all at length in mail after mail. Slaves instead of robots and all of the clients’ being dominant women. Dominatrices, Mistresses, Wives, Lovers, Mothers, Sisters and sadistic sophisticated Bitches all! I was hooked on the idea and started to realize that this was far too large a plot idea to confine to a single novel. This one needed plenty of room. I started to realize that there were actually two stories here. One was the tale behind each themed Domain. Ahh, the Name: The ‘Domains’ seemed so apt and came to mind one long night of writing. The other plot idea was… why on earth was it even happening? Who could be behind a theme park where femdom-fetish was the name of the game? Where did the money come from? What women would organize this? How did they escape attention? That all led to another small writing problem… when, who, how and where? 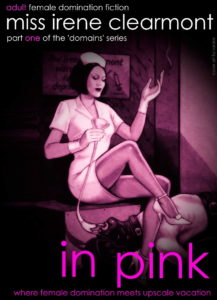 I needed to start in a good place, so just a few years hence in the US. Where could the Domains be sited? In South America… The first part of the Domains that would introduce the reader to the ideas and wrap them in the plot line. ‘In Pink’ was that first novel. A vacation park set far from the madding crowds. A pink lace and frilly place where women enjoyed the intimate services of feminized men. Where a pleasant vacation could be spent humiliating and breaking men forced into a role that amused their owners. Introducing some of the technology and plundering characters and ideas from previous novels of mine on the way. The plot followed a single almost innocent ingenue Mistress who makes a first visit and discovers the delights of having sissy males at her beck and call.  Her two weeks in the Pink Domain opening her eyes as she networks and discovers that there is far more to the vacation than just the pleasures of being attended to at every moment. That a whole society is being created as she enjoys the delights of perfect service. It is her chance to discover herself and become part of something greater. 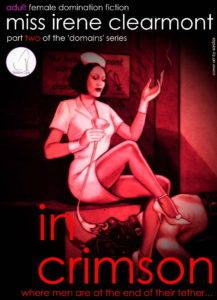 Though set in the future, this is not really SciFi at all. It is just that a few of todays innovations have ripened and changed the world a little in predictable ways. Background for the most part that seamlessly fits the tale. The meta-plot behind the Domains was not really revealed in ‘In Pink’, merely a few hints at what might lie behind it all. The next novel in the series was ‘In Crimson’. This time the theme was latex, leather and more ‘traditional’ female domination. The meta-plot was revealed a little more and some of the thriller aspects of the series began to rear their head. Though most of the entire series is set inside the Domains themselves, this book took the reader outside a little. I write in a linear fashion, so there were still not final decisions as to the length and structure of the series. Hints of the medical White Domain and the plans for the Blue Domain rear their head. It becomes clear that the women that run this place have ambitions far beyond merely being undisturbed in their illicit and illegal pleasures. 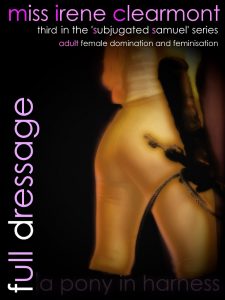 After ‘In Crimson’, I found that everything was coming fully into focus. The series would be five novels, book four would be the end of the main plot, the closure, and the last one would be set in the world that I had created, separate and yet derivative. I had a few delicious choices to make now. What actual areas of my fetish ‘Westworld’ would the next two be set in? There was plenty of choice, but I had so enjoyed writing ‘Full Dressage’ that a ‘pony’ setting would be the next. The meta-plot was laid a little to the side in ‘In Roan’. I concentrated on making my female domination stables as complete as possible. How the women fill their time, how the stables work, how illicit nighttime outings take place, a hunt scene where fetish is the aim. This novel fills in a lot of the gaps in the organization of the Domains, takes the reader behind the scenes as well as being a fetish splurge that will amuse and gratify my readers. Once again, I took a new Mistress in hand and led her through the delights of the world that made men stallions or fillies and women Mistresses or mares as well as properly introducing some of the strong women that are the Queen-bees of the vacation park that caters for dominant females. 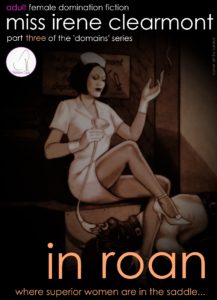 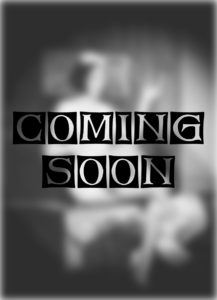 In fact, I was heading for a destination. 2040 was to be the US election that would be the climax of the meta-plot of the series and I felt that I was too close in time to fit the jigsaw puzzle together. This was of course the main reason for the overlap I mentioned above. The Silver Domain was not themed either! This was the place for the senior women of the vast conspiracy that was coming to a head. Here, each woman could choose her own theme, indulge herself in whatever excited her interest. This was where the higher levels of the Domains, the ‘Golds’, spent their time in gratification and the extremes of a fetish femdom Eden.

Meanwhile, the thriller aspects made themselves clear as the book became the struggle between the Domains and the presidential hopeful, Barrington Rossi (we meet him first in ‘In Crimson’ implicated in an act of terror). I will not spoil the plot of ‘In Silver’ and have danced around the others in this post. All that I can say is that a political struggle, a devious plan, a frightful enemy and plenty of sub-plots are entwined into a tapestry that reaches its climax (!) at the election of 2040. The ending, a fitting gathering of all of the main characters and then a small intimate series of meetings between the three main contestants for sexual power closing the book.

In order to shoehorn the sex, the plots and thriller aspects, the rounding off of some characters (I am an author that can kill off a favorite character with little effort, so watch out!) as well as to look forward to what happens afterwards took almost a hundred and twenty thousand words of prose. This is around 450 pages of a printed paperback, making it almost the longest book that I have written. Double my usual wordcounts. This is a ‘War and Peace’ of female domination. There is no let-up on the erotica, no let-up on the thriller, no let-up on character development and no let-up in twists and turns of plot.

In all, so far, the length of this series is at around 1,400 pages of normal print, a vast single plot that never lets up and drives the reader to turn the pages with each revelation. It has taken me around 2 years to get this far and I just have that final book to write. It took endless research to make it a complete experience, endless rewrites that make the tales all flow like a wide river. The quality has been kept at the highest level, there is little in the way of padding. I have cut rather than build up at the edit stage to keep it tight. Make no mistake, this is a fetish read like no other, endless invention, suffering, love and emotion.

Female domination at every junction, obsession written into every word, the passion of the writer and the characters making it a tour-de-force! I have written around 40-50 novels so far and this series pours all of my delight at making men kneel in their place into a single intimate narrative. The culmination of all of my writing so far! If you have read any of my other novels, you will recognize old characters arrive in the Domains to become part of this new reality that I have created. A few old places and a few old plots are also revisited in the series, binding around two thirds of all of my writing into a single whole. Another reason that the effort has taken so long.

So, what about that last book and fifth of the series?

It will be written next year sometime. There is time now! The intention was never to make it the climax of the series. ‘In Silver’ bears that crown of thorns. Instead, the last book will be a collection of tales set in the world that has been created by the Domains. One where women rule supreme, a world that is my future, a world where men crawl and women punish them for their own sweet gratification. There is time to pull my thoughts together and make it a fitting end to the Domains Series, it is the postscript that will delight my readers as I can freely play with characters and moments of time where female domination is fated and the inexorable obedience of men is a given.